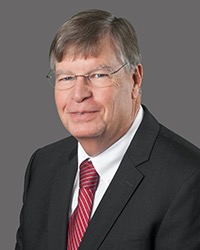 Doug Gibson has been a leader in the Ware County legal community for over 36 years.  Today, he represents clients who have been injured in serious accidents, as well as families that have lost a loved one due to the negligence or misconduct of another person or business.

Doug has previously served the local legal community in a number of capacities, including Solicitor General, Public Defender, and President of the Waycross Bar Association.  He currently presides over the Municipal Court of the City of Waycross and previously served as the Ware County State Court Judge, an elected position he held from 1997 through 2020.  (Doug’s service on the bench allows him to maintain a private law practice focused on personal injury and medical malpractice cases.)

Over the years, Doug has taken significant steps toward enhancing his ability to represent clients in personal injury and medical malpractice cases.  He earned his Bachelors of Science in Nursing (BSN), received his EMT Certification in 2008, and completed the Paramedic Diploma in 2010.  He is also Captain of the newly organized Pine Valley Volunteer Fire Department, and participated in the creation of the Department after the devastation caused by the Sweat Farm Road fire.

Doug married Delores Taylor of Charlton County in 1978 and raised their family in Ware County. They are members of the First United Methodist Church, where they have served in various capacities over the years. Their son, Taylor, is a commercial pilot and registered nurse.  Their daughter, Addie, practices law alongside her father at Gibson & Associates, P.C.

Learn More About Us

What Our Clients Say